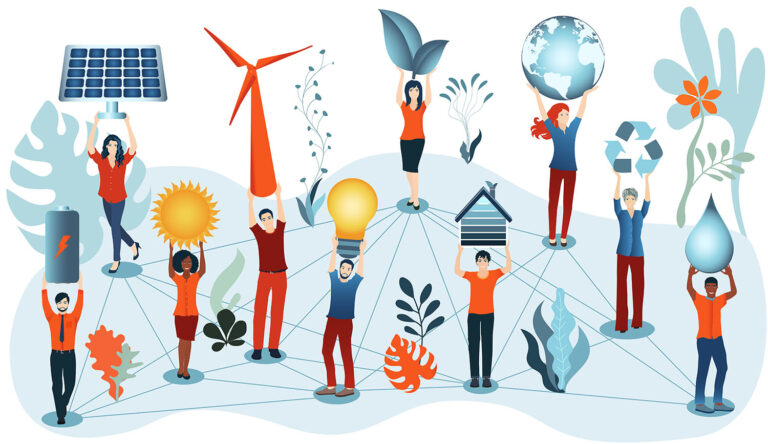 This article was written by Marion Rae and originally appeared in Australian Energy Daily.

Community battery storage isn’t just an engineering and development puzzle for regulators and town planners, it’s a social challenge, according to researchers from the Australian National University’s battery storage and grid integration program.

Over the past year, interest in the idea of community battery storage has begun to expand beyond community energy advocates to the industry more broadly, including networks, regulators and even the Australian Energy Market Operator (AEMO).

“The Energy Security Board is actively looking at it,” Shaw said.

“They’re looking at how do we price the market, the two-way market, and also actively looking at community batteries and community scale storage.

“This attention is because it can provide a lot of different services for different stakeholders. It can provide storage for customers in potentially a cheaper way because of economies of scale but they can also provide the support for the grid that we increasingly need as we’re adding more and more solar generation from our rooftops.”

Community batteries are on the scale of 10-100 times the storage of a typical household battery, have more than one user, and sit in front of the meter, typically on the low voltage network — imagine a shipping container in a green space in a suburb.

They are being trialled in Western Australia, where the network operators are government owned and are governed by different rules to the privatised system on the east coast where networks cannot buy and sell energy directly to customers.

Ransan-Cooper explained how the project, from the beginning, had focussed on how the community could be involved and whether this could be a viable future part of the energy system.

While Shaw focusses on the engineering and data modelling, Ransan-Cooper is an expert in energy regulation, governance, risk and energy sociology.

“The technical solutions that we develop will only work if you consider at the same time the people who will be using them,” Shaw said.

Questions about access, affordability and enabling people who were otherwise excluded from renewables to be able to be involved in the energy transition were key, as well as what processes were needed for people to make decisions about accepting the technology.

“What about communities where there isn’t a local government or a network that wants to support the battery? These bigger picture issues around access are ones that we really need to talk about.

“We look for points of tension between different actors in the energy system, points of agreement about the benefits and risks of community storage.

“To be successful community storage would either need to fit within the existing electricity system or if it can’t it needs to stretch and transform it in some way.

“It could work with no or minimal regulatory changes but community concerns about the nature of the electricity system means that there is the possibility for this to be a bit more disruptive.”

A project at the heart of the ARENA-funded program is planned for a new Canberra suburb, Jacka, which has mandated every house to have solar PV.

“That’s driven by the ACT government’s ambitious and world-leading decarbonisation program but it can create a challenge for our local grid,” Shaw said.

Working with Evoenergy the goal of the trial is to see if community batteries can support very high levels of PV penetration.

ACT Suburban Land Agency program manager of sustainability and release coordination Rob Thorman said the Jacka project involved about 750 dwellings and was a “good size” for a pilot.

“Previously, the suburb of Denman Prospect mandated solar PV in their estates but that led to the unforeseen situation where too much energy was coming out of the suburb, which was a concern to the energy network,” Thorman said.

In the next suburb developed, Whitlam, he said they used rebates but worked with Evoenergy to make sure the network was able to deal with the increased flow.

Now they’re looking at Jacka and technical aspects of suburban-scale storage as well as how to achieve cheaper electricity and a sense of greater self-reliance for future owners.

Thorman said Western Australia was leading the way but he certainly wanted to prove community batteries were possible on the east coast.

“We’re a little bit envious that they’re able to enter into these projects because they operate under different energy rules,” Thorman said.

Citizen engagement through deliberative democracy has also been a critical tool.

“The community must be involved. What we saw was that regulatory challenges could be overcome but broader questions of politics and governance might be more challenging,” Ransan-Cooper said.

“There are a lot of interesting and by now quite well-established citizens engagement-type formats that require organisation, great facilitation, resources.”

South Australia had Australia’s largest ever citizens’ jury examine nuclear energy and waste in 2016, while a similar but smaller ACT process looked at the inconsistency of the territory’s ongoing use of natural gas while aiming for zero emissions by 2045.

Climate Assembly UK is bringing together 100 people randomly selected from households to represent the populations of England, Northern Ireland, Scotland and Wales to recommend what the UK should do to become net zero by 2050.

“The energy sector is poised to do a lot more of it,” Ransan-Cooper said.

Collectively owned but not custodians

The research program has already built open-source software, conducted feasibility studies, and tapped the expertise of industry, consumer advocates and government as well as renters and apartment dwellers who are often excluded from renewables.

“Everything from stabilising the grid, avoiding network upgrades, improving access of renewables to the general community and even maybe building trust in the NEM.”

“There will have to be trade-offs. It was very clear through our discussions that there would likely be different models of local storage,” Ransan-Cooper said.

Practical issues such as maintenance, installation standards and challenges around governance were raised but none were deemed insurmountable.

However, it was important to know what the storage was for and who it benefited in the energy system.

“There’s already some concern for instance that PV policies have led to a divide between solar haves and have nots,” Ransan-Cooper said, recommending that issues around access and equity were tackled head on.

“Local government could be first movers, but networks are another obvious group because of the urgency of the technical constraints in some parts of the network.”

Electrical engineer Heather Smith, who is researching the social dimensions of community storage via microgrids at the University of South Australia, said the tension between collective interest and individual interest was key to accurately putting a value on battery assets or street transformers.

“The networks have always collected that collective value and made the most of it for our community but things are changing,” Smith said.

“If we look at some of Elinor Ostrom’s work on governance of the commons she showed that many communities governed their commons effectively.

“One of the keys was how individuals felt they had a say in how the system was governed, they had a say in what constituted a fair distribution of value, and there was a system for helping people that strayed outside the social contract to come back in.”

It emerged in discussions that local context was important but also that the energy sector wasn’t used to working in this way — developing models with community.

“We do need to have a real debate about whether we want to see electricity as a social good not just as an individual good. Community batteries do provide a different way to relate to energy,” Ransan-Cooper agreed.

“Ownership really was critical, which is why local councils, not-for-profits, nursing homes, schools were the types of institutions that people thought would be good to manage the battery.”